In view of absolutely rubbish forecast and zero chance of seeing sunrise 1/1/15 no knockshee spin in am . But to keep up tradition of doing something we ( or possibly I) are leaving Glen at 9am , Green Road , second right , switchbacks ( wouldnt it be great to start the year with a clear round!) , up to the cairn for Cairnuary and home to bed ASAP . 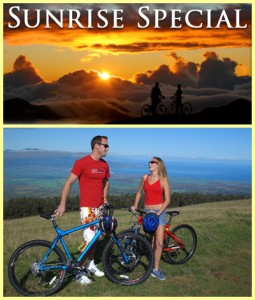 JOD arrived on yet another new steed today , he says he has now found one he likes , time to sell your shares in green bikes then . Davy , Alex ,Paul , Dan , Sky , Herself and COC made up the select group .

The sun was rising in the east so we headed towards the light and Knockshee. JOD set off a ferocious pace with only Davy and Sky fit to touch him . I suspect that frame has a motor in it somewhere. He had settled a bit by the time we got to Sallys yard by which time Dan Duffy was swinging due we are told to a bad case of man flu.

Beautiful light up towards post and over to Knochshee , didnt make for good photos however. Too cold to sit at the summit so back above bath to Fallow , passing the Black Pigs Dyke on our right . Sky recounted the myth of this beast which could only be killed by a silver bullet , be nice to see more about that .

Homw by Fallow for the oldies while the youngsters ( and JOD) set off towards slieve meel.

Next Spin new years morning for the sunrise , leaving Glen at 7.30 am . Might need lights at the start . Hope its a clear as today

A rare Wednesday cycle for NTSR and rarer still on Xmas Eve .

Kenny arrived back from Abu Dhabi with more than a tan , loaded with foreign virus and unlikely to make it to present opening . Please could you leave me that new Scott and the 810 in your will Kenny ? I suspect three or more drinks will flush it out of his system .

Ed arrived on new cheatin 29er and continued to practice his slow cycling ,old habits die hard . BGTV returned for an outing in yellow on the new steed , nearly as many new bikes as JOD .

Happy Christmas to all who cycle with us or who just watch us suffer …..

A range of Santa impostors arrived at the Glen today , along with an Elf , a dodgy looking Reindeer , a holly bedecked Sky and  a Tinsel headed Ian , Oh and Eamon who was the worse for a very ( very) severe man flu which will likely see him in intensive care before the day is out . Dan Duffy was handing out no sympathy however.

Up to giants pad , green road , into Fallow loop and onto the trails , out to tunnel and up to mast . Just in case no one noticed , the COC had a clear round which in the red sweat suit was quite something . Met Al at the cairn , out looking for xmas present inspiration no doubt . Stopped  to admire the christmas tree lights which some damn fool had taken to the top without realising there was no plug.

Judging by the state of my Santa trousers at this stage , I’ll not get another year out of them .

Then out to Ballynagelty , end of the world , and home by reverse giants pad and wall .

Afterwards a  select gathering in NTSR towers for mince pies and a small libation. Calendars distributed and plans laid for 2015 .

Happy Xmas to all

Wednesday 24th.  Any takers for a spin ?

Saturday 27th 9am Glen as usual

Tuesday 30th 7pm Nite Spin ( might be low on takers)

NOT the Sunday RUN